In his opening remarks, President Larigakis addressed the importance of two major crises challenging Greece and Cyprus and added that Turkey presents an additional challenge to an already delicate situation.

“As we are all aware, Greece continues to address two crises – economic and migratory,” Larigakis said. “As daunting as these challenges are, Greece’s foreign policy hurdles all remain thanks largely in part to its neighbors, Turkey and FYROM. Despite these domestic and foreign policy challenges, Greece, a frontline state in the fight against terrorism, remains an invaluable contributor to United States and NATO security interests in the Mediterranean.”

He added, “For Cyprus, all eyes have been on the settlement talks, which are currently at an impasse.”

Ambassador Lalacos expressed his gratitude for the continued cooperation between the Embassy of Greece and AHI. He explained despite the deep economic issues that Greece faces, it remains one of the few NATO members that contributes the required minimum 2% of GDP on defense.

“The importance of Greece when it comes to the United States can be explained in just two words, Souda Bay,” the ambassador said.

In terms of regional interests, Ambassador Lalacos identified the Balkans and the Black Sea as the two most important regional areas where Greece’s insight can be helpful to all interlocutors. On the matter of Turkish relations, he said it was not possible to discuss the topic “without acknowledging that Cyprus is not resolved.”

Ambassador Pantelides spoke briefly about three priorities of Cyprus in Washington. They are: the continuity of support on the resolution to the Cyprus problem, the improvement of bilateral relations, and the resolution of regional issues with the specific position and profile that Cyprus has in the region.

“It is very important to not only think of deterrence in the region, but soft power as well,” Ambassador Pantelides said. “Cyprus can be, and will be, a very important partner,” in that aspect.

The ambassador provided four categories in the negotiations that can be solved between Greek and Turkish Cypriots including: power sharing, territorial arrangements, the economy, and issues of property and missing persons. There were three other categories that he acknowledged could not be solved without the contribution of Turkey, a nation which is currently preoccupied with a constitutional referendum. 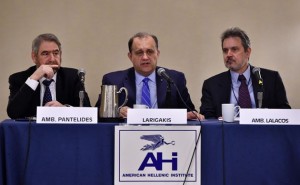 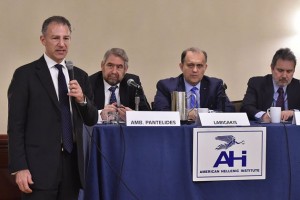 The American Hellenic Institute is a non-profit Greek American think-tank and public policy center that works to strengthen relations between the United States and Greece and Cyprus, and within the Greek American community.